The news that Aretha Franklin died this week created an outpouring of tribute on social media. Everyone posted articles, photos, videos of performances – all honoring the Queen of Soul. It was heartening to me to see, for one brief moment, a meeting of hearts and minds on a subject.

In our divided country, you can’t even talk about the weather without potentially getting into a fraught argument over climate change. Everything from the Robert Mueller investigation of Russian collusion to the prospect of NFL players taking to their knees in protest this fall is cause for anger and vitriol.

It’s not that thoughtful people can’t disagree on a subject. With a two party political system, free speech, and a free press, it’s inevitable that individuals will have differences and the urge to express those differences. What’s new about the current state of discourse is that one needn’t confront someone face to face. With social media, we can sling insults at each other from a safe distance.

A case in point is Donald Trump’s use of Twitter. The president usually tweets in the wee hours of the morning, a time when most people’s discernment and judgment are not at their highest. These pronouncements are often filled with vitriol, as Trump attacks anyone he perceives as an enemy. And even though said “enemy” can take to Twitter to send a counterpunch, there is something not quite real in the exchange. If Trump were forced to confront these people face to face, I doubt whether he would act in such a hateful and spiteful manner.

This is true for all of us, and it is making America an inhospitable place. “Comments” sections on social media are minefields we should approach on tenterhooks. Feelings get hurt, friends get “blocked,” and our images of people we’ve known and liked, or even loved, are tainted.

The divisiveness prevalent in today’s society should worry us. It feels as if the very social fabric that makes up civilization is being irreparably torn. And once it is in tatters, it may be impossible to put back together.

When I was about 9 years old, our family got our first color television set. It was a wonder to us and a plague to my father, who spent endless hours trying to get the color adjusted properly. People on early TV shows always looked orange or green, it seemed, but it was exciting to see the television world full of color. It was like that moment when Dorothy gets deposited in Oz, and she steps out into a new and beautiful world.

The advent of color TV coincided with a flowering of expression and political activism in the United States. The civil rights movement had given birth to the Civil Rights Act of 1965, the beginning of a larger push toward affording blacks equal rights to whites. Growing unrest over US involvement in the Vietnam War led to protests and violent clashes with police. The late Sixties was the time of hippies, free love, and drug experimentation. Many in America, youth in particular, rebelled against the homogeneity and conservatism of the 1950s.

The Fifties were a prosperous time for many, and after the deprivations of the Great Depression and the horrors of World War II, Americans naturally craved comfort and security. The problem was that nonconformity was frowned upon, and prosperity and security remained elusive for blacks. So although some of the unrest and unruliness of the Sixties was negative, overall the era brought about progress for women and minorities.

Trump’s America seems to be a return to black and white. So much of his political platform and presidential agenda are designed to turn back the clock on civil rights, reproductive freedom, and freedom of expression. During the campaign, for instance, he called nonwhite immigrants criminals, rapists, and terrorists. He questioned the validity of Barack Obama’s U.S. birth certificate until late in the campaign. He said that women who had abortions should be punished and bragged about grabbing women’s genitals against their will. This was dismissed by his supporters as “locker room talk.” It seemed clear to those not dazzled by his reality TV fame that his slogan “Make America Great Again” really meant “Make America White Again.”

As president, Trump has put his reactionary views into action – decreeing a de facto travel ban on foreign Muslims, appointing an anti-civil rights attorney general, removing the contraceptive mandate from Obamacare, calling for a ban on transgender individuals in the military. He has made both veiled and overt threats against press freedom and taken exception to NFL players taking a knee during the national anthem. He has called these peaceful protestors “sons of bitches” while refusing to condemn white nationalists marching in Charlottesville and shouting slogans such as “Jews will not replace us.”

Seeing things in black and white is an apt metaphor for both the conformist Fifties and today’s politically polarized environment. It is incredibly depressing to see the hard-fought gains of the Sixties and Seventies being undone by the current administration with the complicity of the Republican-dominated Congress. I can only hope that the many Americans who have grown to love a world of color will rise up and demand that our country move forward, not backward, in the advancement of freedom and human rights. 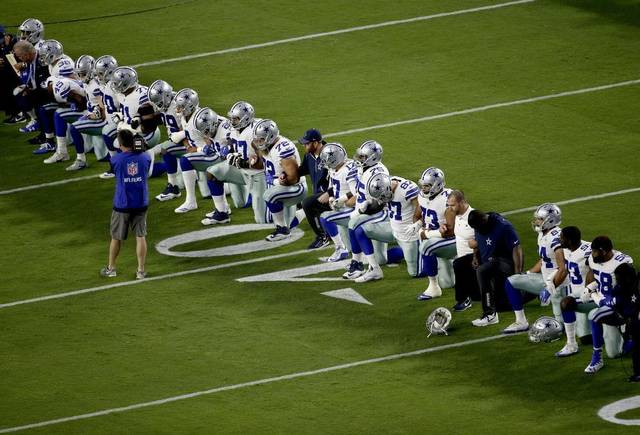 On behalf of a divided nation, thank you. Your insensitive and thinly veiled racist jabs at Colin Kaepernick and other black NFL players has had some beautiful unintended consequences.

Prior to your latest childish and angry tweet, wherein you called peaceful protesters “sons of bitches,” a few NFL players had been taking a stand (so to speak) by taking a knee during the national anthem at the start of games. Since your remarks, entire teams of NFL players, such as the Pittsburgh Steelers, have chosen to remain off the field rather  than salute a flag that stands for freedoms they find far too elusive. More and more players have chosen this dignified and nonviolent method of protesting police brutality and institutional racism. So rather than do away with the practice, your hateful comments have created a tidal wave.

Another unintended consequence of your hate-spewing bile is that you have fostered unity among players, coaches, and others who support their teammates in their struggles to right injustice. Last night at the Dallas Cowboys game, the entire team including the coach took a knee to make such a statement of solidarity. Then they stood, arms locked together, during the anthem. All of this had been agreed upon beforehand in conversations that may never have taken place had you not had one of your Twitter tantrums.

I have also noticed people who are not particularly political taking a stand – whether prominent celebrities or just Facebook friends who are fed up with the hatred and casual racism that has been growing like a cancer since you took office. Their courage to speak out gives me great hope in our future. It gives me hope that your election was an aberration and that people of good will can bring some sanity and dignity back to our great nation.

I pray that this movement continues to grow and that it forces local and state governments to take action against police brutality and other forms of institutional racism in this country. I pray that it is not just a blip on the screens of our lives. I pray that it energizes a new civil rights era and moves us away from division and hate and towards unity and equality for all.