I’m sorry to say that after giving up dessert for the 40 days of Lent, I haven’t lost my sweet tooth. On the eve of Easter, I can almost taste those dark chocolate marshmallow eggs I crave.

I was really hoping I’d lose my taste for sugar, villain number one according to the latest nutritional advice. It’s sugar, we are increasingly being told, not fat, that we should be avoiding. And I think that’s because as with many things in life, we take our love for sweetness too far.

In the olden days, sugar was a luxury item. It was used sparingly to sweeten coffee or tea. Mother might bake a cake for a special occasion, but people otherwise didn’t get much refined sugar in their diets. In wartime, sugar was one of the things that was rationed.

But as modern technology made all kinds of convenience foods available and cheap, sugary foods and drinks became ubiquitous. One of the biggest sources of calories in the American diet comes from soda pop, which is loaded with sugar. High fructose corn syrup (HFCS) in particular is a molecularly altered sugar that is believed to interact in harmful ways with the human body. (Thanks for that science-y info, cousin Trish!) And HFCS is the main ingredient in most sodas.

And switching to diet drinks does not seem to help people lose weight in the long run. I think that’s because the artificial sweeteners still make us crave sugar. And I think that is behind my annual failure to curb my sweet tooth during Lent. Not having banished all sugar from my diet, I still want it.

Sugar is synonymous with fun and celebration. Every party features sweets: from birthday cakes to Christmas cookies to Easter candy. When I was a child, in the evening while we watched TV we were allowed to pick out a candy bar for “treat time.” Dessert was always the reward for having eaten those horrible green beans. Sweets are the stuff of childhood dreams. Why else would Roald Dahl have written the fantasy Charlie and the Chocolate Factory? Why else would the Brothers Grimm imagine a candy-studded gingerbread house to lure the unsuspecting Hansel and Gretel into the witch’s clutches?

Tomorrow the Easter Bunny will leave some delicious chocolate at our house. Luckily, the treats the Bunny brings are far too pricey for me to wolf down in one sitting. So I’ll pace myself (and share with the family). I may never conquer my sweet tooth, but let’s hope my Lenten abstinence from them will help me better appreciate the delights of sugar.

As Shakespeare would say, “Sweets to the sweet!” 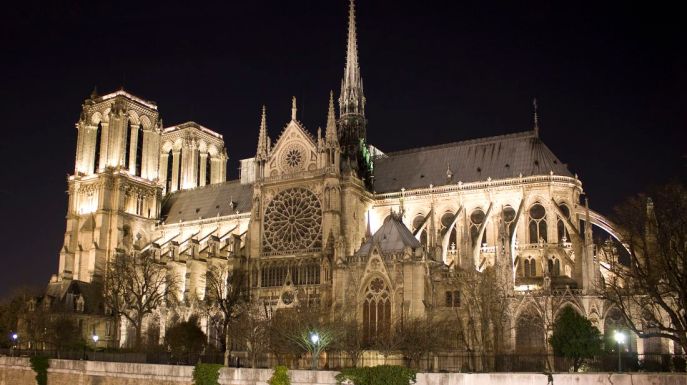 The sight of the venerable Parisian cathedral Notre Dame on fire filled onlookers around the world with horror and sorrow. Unlike most of the disasters that make news worldwide, this one thankfully involved no loss of life. And yet the dismay so many of us felt on Monday as centuries-old treasures of art, architecture, and religion threatened to go up in flames was only too real.

Across the Seine, the crowd broke into spontaneous prayer and hymns as they watched smoke billow up from the spire of the medieval cathedral. To imagine a Paris without the iconic edifice complete with gargoyles and flying buttresses was, well, unthinkable. Notre Dame is one of the most visited landmarks in the world. Hundreds of people have been posting photos and memories of their own visits to Notre Dame since its very existence became imperiled Monday. The wealth of art and the breathtaking feat of engineering that has held up the 12th Century structure for so long are irresistible for art lovers, historians, and even casual tourists.

But Notre Dame is first and foremost a monument to the Catholic faith and the devotion of its followers who risked life and limb to build such a beautiful and imposing structure.  Catholics hold a special place in our hearts for Mary, “Our Lady.” No doubt many Catholics fervently begged Our Lady to intercede with Christ to save her namesake church.

I have nothing but admiration for the tireless efforts of firefighters to contain the blaze and limit the damage to Notre Dame. Much in the same way as the builders of Notre Dame in the Middle Ages, these courageous Parisians risked their lives to save a building. Luckily only one firefighter was injured while working to put out the flames. Still, I wouldn’t rule out the possibility of divine intervention in saving the venerable cathedral.

The fire at Notre Dame has brought public awareness to three other fires that occurred in the past two weeks at historically black churches in Louisiana. The fires were no accidents, however. They were incidents of arson, and a white man has been charged with hate crimes in connection with the destruction of the three historic places of worship. A Go Fund Me campaign has since raised $1 million for reconstruction.

All of this has occurred in the midst of the Lenten season and Holy Week, the preparatory 6 days before Easter, the Christian celebration of resurrection and new life. In the past few weeks the flames of hatred and destruction have raged. On Saturday night, the flame of the Easter Candle will be lit at churches all around the world to symbolize the return of the Light of the World, Jesus Christ.

The response to the fires in Louisiana and Paris, whether religious or secular, has shown that the human spirit will always rise up to champion goodness, beauty, and hope. A fitting message for the Easter season and the arrival (finally!) of spring. 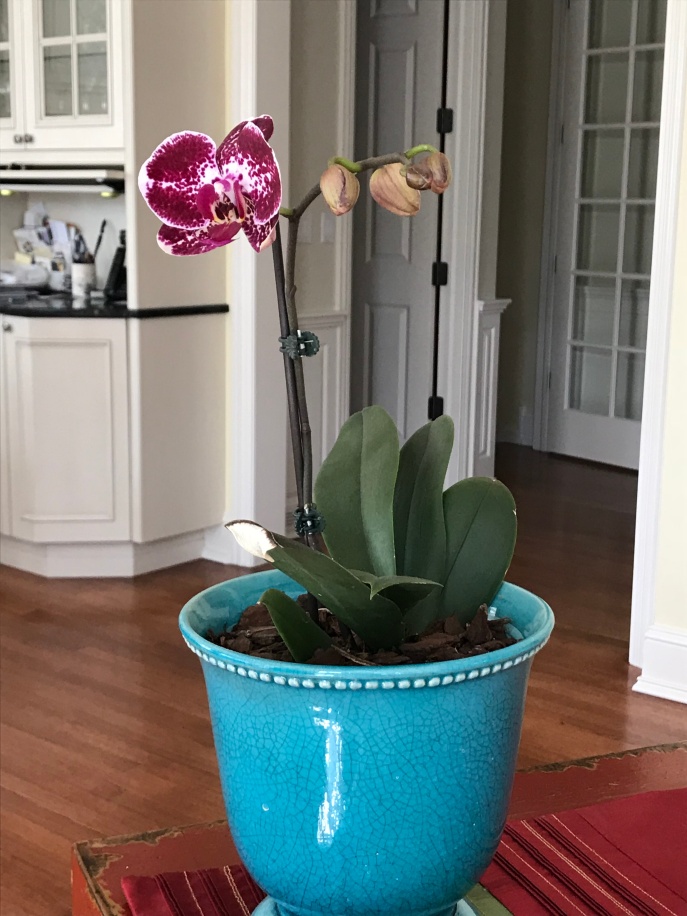 Over the years, my piano teacher and I have become friends. B. has always been generous – bringing cards and treats at holidays, making cakes for various occasions. We celebrate each other’s birthdays. I have known B. for over ten years.

So when B. was diagnosed with cancer last August, I was upset and concerned. With no family of her own and no means of financial support when she isn’t teaching, it was going to be a struggle for B.

Over the past six months, B. has endured grueling rounds of chemotherapy and radiation. She has trouble eating and drinking, and she has been in hospital or nursing home care for the better part of these past six months.  Two weeks ago, as the hospital got ready to discharge B., I was extremely concerned. She had been so frail, and I was worried that she would not be able to care for herself all alone in her apartment.

About a year ago, B. gave me an orchid plant. A lover of these notoriously finicky flowers, B. instructed me to care for the plant by putting a few ice cubes in the soil, letting them slowly water the roots. The orchid bloomed for a time and then went dormant. For the rest of the year, the plant’s large green leaves stayed glossy and alive. But the stem remained bare. Then in February, I noticed the roots climbing over the side of the pot, so I replanted the orchid in a slightly larger pot. Sure enough, large buds began to form. And just last week, the first blossom opened up in all its purple glory.

At home in her apartment, B. is also starting to get better. She is eating and drinking on her own, her hair has come back, and the color has returned to her face. As she regains her strength, I see glimpses of the fiercely intelligent and independent musician and opera singer she once was. I showed her a photo of the blossoming orchid she had given me so long ago. We agreed it is a sign of hope.

As Easter approaches, we celebrate resurrection. And I feel hopeful for B. and the new life that seems to be slowly unfurling for her. And I pray for all those struggling that they find a new hope in this Easter season. 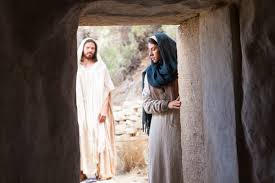 There is a moment in the Gospel of John that always brings tears to my eyes. It is the third day since Jesus was crucified, and his devoted disciple Mary Magdalene sits weeping by the tomb. She had gone to give him proper burial rites, but when she arrived at the tomb, Jesus was gone. Some angels ask her why she is crying, as does the risen Jesus himself, but she doesn’t recognize them. Then Jesus calls her by name, “Mary,” and she realizes her Lord is before her.

I think it’s because my name is Mary that I so identify with the miraculous beauty of this moment and the personal nature of salvation through Christ. Think about your most intimate relationships. Then imagine having that kind of intimacy with the Creator of the universe. The beauty and strength of Christianity is that we place our faith not in a system of beliefs, but in a person – a person who died a gruesome death so that we could fully live.

There are so many religious conflicts in the world. Competing faiths and even competing ideas within faith traditions create so much strife. We fallen humans use religion for our own self-aggrandizement, for dominance, or to excuse our violence. We are prideful, and we even extend that pride to our so-called religious beliefs.

Most of us are probably capable of giving up our lives for our children or other close loved ones. Our love for them supersedes our interest in self-preservation. I used to wonder how the early Christian martyrs could endure horrific torture and death in Jesus’ name. Now I realize that they were willing to sacrifice themselves not for an idea, but for a beloved person, their Savior.

In the gospels, Jesus continually exhorts his followers to bring about the kingdom of God. By the end of the story, it is pretty clear he does not mean by force or by law. The only way to share the personal salvation we have received is within the personal relationships we foster in our daily lives. Our patience with our children, our acts of charity to the less fortunate, our kindness to our co-workers and others: these are ways to strengthen our relationship with the One who gave us life.

In John 15:16, Jesus says, “You did not choose me, but I chose you and appointed you so that you might go and bear fruit–fruit that will last.” What a beautiful feeling in this broken world to be chosen by a loving, self-sacrificing God. There is only one way to honor this reality: by sacrificing ourselves for others. I hope in my life to bear bushels of good fruit in His name.