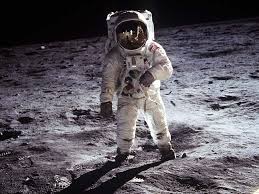 In a person’s life, there are many memorable events: births, deaths, marriages, rites of passage, and historical events. One such event from my childhood was the sight of Neil Armstrong stepping out of a space module and landing on the moon with the famous words, “One small step for man; one giant leap for mankind.”

It was July 20, 1969. My family was visiting my father’s brother and his brood of nine kids. We were clustered around a small television set in the living room, and although the summer day beckoned, we were riveted to our seats. Space travel was a feature of my early years. Ever since the USSR had beaten the US into space with Sputnik, we were in a Cold War competition to travel farther and dare more than our Communist foes.

Seeing footage of the moon landing, the flag planting, the gravity-defying leaps of the astronauts, the deep craters that from Earth looked like holes in Swiss cheese: it was awe-inspiring.

Other things about that summer of ’69 stand out for me. The Chicago Cubs were in a rare race for the National League pennant. In those days, you could go to the airport and watch planes land and take off just for fun – no boarding pass required. My dad used to take us on occasional Sunday afternoons to greet our heroic Cubs on their return from an away series. We got to see the greats up close: Ron Santo, Fergie Jenkins, Billy Williams, and, of course, Mr. Cub, Ernie Banks. On these trips my dad, still dressed in his Sunday suit and tie, was sometimes mistaken for a Cubs manager and once even asked for an autograph.

That magical season ended in a defeat at the hands of the New York Mets, a team I detest to this day for “stealing” the pennant from my beloved Cubbies. Still, I cherished the baseball cards I’d collected and reiterated in my head the lifelong Cubs mantra, “Wait ’til next year!”

We all have unique milestones in our lives such as those I recall from 1969. There was the Blizzard of ’67, for instance, when record snowfall paralyzed the city of Chicago. There were the riots in ’68 that occurred at the Democratic National Convention being held in Chicago. Later in my life I witnessed a rare sighting of Halley’s Comet, saw the Berlin Wall get torn down, and lived through the Y2K scare of the new millennium. Most of us alive today got to see the first black president of the United States, Barack Obama. And, of course, my consolation prize for the disaster of the 2016 election was the Cubs’ winning the World Series – after a 108 year drought!

The 50th anniversary of the moon landing has created a renewed interest in space travel. There is even an entire line of gear with the old NASA logo to purchase. Still, there’s nothing like being able to say, “I was there.” I hope the newest generations of Americans get to witness some spectacular and inspiring events in their lifetimes.